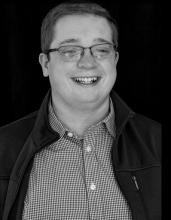 Mr. Matthew Grogan is a graduate of Lesley University Threshold Program in Cambridge, Massachusetts.  Matt is an accomplished self advocate and has served in the role of “mentor” to those developing their voices as self advocates. He has presented at a number workshops, trainings and more recently webinars, on a variety of subjects surrounding being an individual with Autism, transition planning, self advocacy and systems change with regard to NYSED Diploma requirements. He presented at NYIT to medical students on the subject of “What Autism Looks Like in an Inclusive World” and was a panelist at LIU Post for an “I’m Determined” workshop. He has utilized his training and experience to advocate for disability rights on the local and state levels; as a result has learned the importance of collaboration and networking within professional various communities.

Born and raised in Seaford, his involvement in Seaford schools and the surrounding community served as an excellent foundation for his transition to post secondary life. In Seaford Matthew served in many roles including mentor, role model, Football team manager, SEPTA Student Representative. and a physical education aide intern.

During the course of his career exploration Matt volunteered and interned at many places on Long Island but enjoyed his internship at Adventureland which incorporated his love of amusement parks in his vocational experiences. In his work at the Long Island Aquarium with the Riverhead Foundation, Matthew honed in on a field in which he would ultimately love to pursue studies and eventually work in, Marine Biology. Matt is currently part of Ken’s Krew and independently works at Home Depot as part of the Farmingdale team where he continues not only to accumulate job skills but also continues to build great friendships and connections.

Mathew keeps himself active socially by participating in many of the PCC activities; attending PBS ACE classes; involvement in Nassau County PAL Special Needs Unit sports and social activities; and is part of Long Island Rough Riders Sled Hockey Team. He is in the process of finding an apartment and works with a housing navigator to that end. He actively participates in his Person Centered Planning as well as the development and revisions to his Life Plan and Employment Plans. He very recently was contacted by the producers of Love on the Spectrum and interviewed as a potential participant in the Netflix series; which he is a huge fan of.

Matt’s self declared “super power” is “kindness” which he spreads readily.